Read about the operational limits that define the boundaries for changes to the competencies required by seafarers.

Operational limits define the boundaries for changes to the competencies required by seafarers. The training, skills and knowledge required for specific areas and the experience required to operate within these areas are determined by these limits.

Changes made to the operational limits under the new Part 20 include:

The operational limits are:

The following combined areas are also applied to some seafarer certificates:

The enclosed waters limit includes specific areas identified in Appendix 1 of Maritime Rule Part 20 and all New Zealand inland waters. It equates to STCW’s definition of “…inland waters … or waters within sheltered waters”.

STCW requirements do not apply within enclosed limits.

Individual enclosed limits are capable of being expanded to allow “pilotage” limits for certain vessels.

Changes to the inshore limits from those defined in the previous Part 20 include:

STCW requirements do not apply within the inshore limit, except for vessels of 3000GT or more operating exclusively within restricted limits.

The inshore fishing limit comprises all the waters within New Zealand’s territorial sea and the waters of the coastal limits north of a line from 46 degrees 42 minutes south, 167 degrees 08 minutes east to 46 degrees 42 minutes south, 167 degrees 18 minutes east that provide direct access to Solander Island from Foveaux Strait.

For New Zealand purposes, the coastal limit is within “near-coastal waters”, as defined by STCW. Full STCW requirements apply to certificates required for vessels of 24m or longer within the coastal limit.

Full STCW requirements apply to certificates required for vessels of 24m or longer within the offshore area. 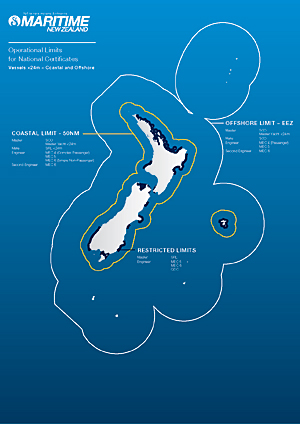 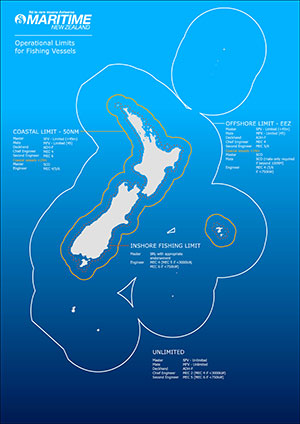 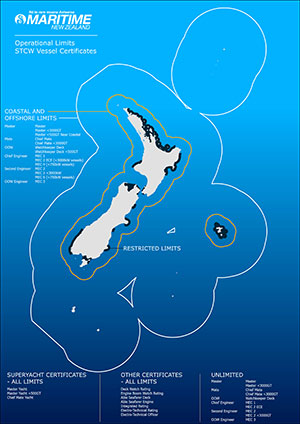 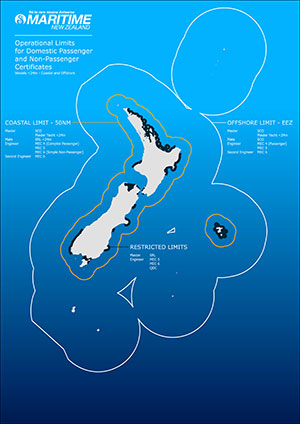